Show #26: The Machine Behind The Music 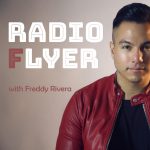 Radio Flyer
Show #26: The Machine Behind The Music

Terry Anzaldo has worked with the likes of Madonna, Alanis Morissette and Wu Tang Clan. He’s also a record industry veteran who’s been the Senior Vice President of Maverick Records, Vice President of RCA Records and launched the band Los 5 all the way to the iHeatRadio Music Festival in Las Vegas! He breathes music. He breads talent. He’s made some legendary deals in Hollywood. He’s a story-teller. He speaks from the heart. He is T.A.